Drinking CBD Coffee Before Yoga Can Elevate Your Practice 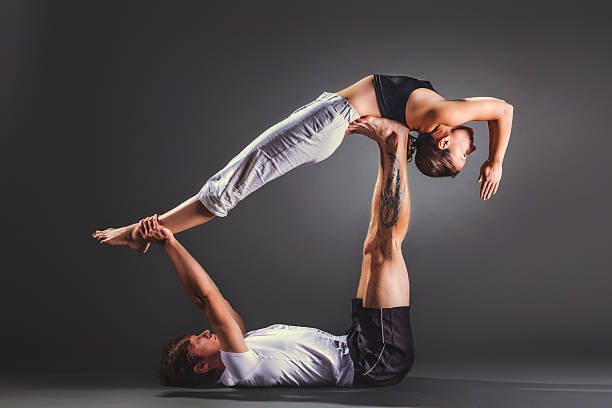 Cannabidiol, otherwise known as CBD, is less psychoactive than its cousin, Delta-9 THC. Both cannabinoids are used in various forms to subdue pain, inflammation, depression, and anxiety, along with reducing stress and seizures in folks with epilepsy. The combination of practicing yoga and drinking CBD cold brew coffee causes miraculous effects and some pretty rad vibes.

CBD is the latest craze. Although Delta-9 usually comes in first place, CBD is a close runner-up. In fact, there are more than 100 cannabinoids in the hemp plant.

Each chemical compound has different uses and benefits. For instance, CBN is known for promoting relaxation and treating the symptoms of sleep disorders with its sedative-like properties.

There’s no reason to doubt the people who are touting these trendy cannabinoids as magical “cure-all” elixirs.

You’re probably wondering, ‘What do CBD and yoga have in common,’  and ‘Why should I use CBD before yoga?’ Don’t worry, we’ll go over some important facts with just a few opinions sprinkled in.

Our team curated a list of reasons why CBD coffee can elevate your yoga practice. Here’s the scoop.

The Perfect Duo: CBD and Yoga

Yoga and cannabidiol have a lot in common. Both natural remedies boast a cocktail of anti-inflammatory, pain relieving, and mood-boosting properties that work in conjunction with each other to create an incomparable experience.

Drinking CBD coffee before your go-to yoga sesh is a surefire way to benefit your mental and physical health.

“The results of drinking a cup of hemp coffee before practicing yoga is damn near magical,” according to Ina Visich, a 200-hour Registered Yoga Instructor.

“When my students don’t drink CBD coffee before class, they are often fatigued, less flexible, and suffer from poor concentration,” Visich continued. She sells locally sourced, hemp-derived products like CBD coffee in all the yoga and wellness centers she owns in New York.

She explained how CBD coffee amplifies the effects of yoga and vice versa. Since CBD and yoga minimize pain, mood disorder symptoms, inflammation, seizures, and more by themselves, the results of combining the two double the benefits.

Ina continued, “ Your yoga schedule can be as flexible as you allow it to be. So I like to practice on the beach, in studios, at home, on populated streets, naked on my balcony…who gives a shit?”

Delta 8 coffee relieves post-yoga soreness. You can ingest D8 before bedtime without experiencing sleep disruptions. Habits form fast and disappear quicker than the speed of lightning, according to mental health professionals. However, people can repeat healthy activities for 21 consecutive days in order for them to become a routine, a ritual.

Human’s often experience racing thoughts: When is my daughter’s soccer practice, will my husband actually go to the grocery store this time or will I show up at the bus on time?

The Hype Is Real: Yoga’s More Than “Just Exercise”

In recent years, many fitness centers have begun teaching yoga classes, called “CBD + Yoga.” Depending on the form, the yogis in attendance sweat like hell or become deeply entranced in a calm, serene state.

Vinyasa and Ashtanga are fast-paced and burn a ton of calories, whereas Restorative and Yin Yoga consist of long-hold poses that promote a good night’s sleep.

Yoga is an ancient physical, mental, and spiritual practice, in which people participate in an elegant sequence of poses that flow together with each inhalation and exhalation. The practice was passed down from teacher to student before there were written records.

The act of practicing yoga teaches you more about who you are as a person, which is enlightening, and you also gain a keen insight into the human condition.

Both beginners and advanced students embrace yoga and meditation, thanks to the sense of calm and relaxation, better sleep, decrease in physical pain, PMS relief, better sleep, less pain and inflammation and so much more.

I personally feel a trillion times better when I’m leaving my morning yoga class. I’m the best version of myself after the final, long-hold restorative pose, Shavasana, which is how you conclude any yoga practice.

Can CBD Give Me More Energy?

Raise your hand if you’re searching for natural options to promote energy and minimize fatigue *raises hand*. Let us go over some recent statistics: One-third of the population joined together and raised their hand, metaphorically of course.

It’s time to throw all the cannabinoid-free ground or whole bean coffee and Keurig cups you own into the trash bin — seriously. Once you’ve adjusted to the new norm, you’ll thank us. We promise.

CBD can help bring about increased energy levels due to its ability to enhance protein synthesis and expression within areas of the brain associated with wakefulness. It also works to regulate the endocannabinoid system, which can modulate your body’s sleep-wake cycle to create lasting energy.

Hemp-derived coffee is used by people during yoga classes so they can keep their minds from wandering off and concentrate on the session. Concentrating will help you connect your mind and body to flow as one. CBD helps aid your mind to focus on your practice by interacting with neurotransmitters such as dopamine and serotonin, leaving you with a more positive attitude.

CBD is known for counteracting the dreaded jitters and crashes associated with caffeine. Ya know, the side-effects that you absolutely loathe but still continue to tolerate every day — until you read this kickass blog post, at least *wink*.

Drinking a cup of CBD-infused joe can boost your energy levels before and after an intense yoga sesh.

We suggest hot brew beforehand and CBD cold brew coffee when you’re hot, sweaty, and home. The uplifting formulas guarantee that you feel energized when you and your fellow yogis say “namaste” together.

Delta-8 Coffee Is The Best Holistic Approach To Modern Medication

Delta-8 cold brew isn’t within the scope of pharmaceuticals. The FDA classified hemp-derived goods as medicinal supplements. Our team is dedicated to choosing healthy alternatives to modern medicine.

D8 coffee is the pick-me-up you need in order to relieve the soreness that’s associated with exercise. When your pain reaches a 10 on a traditional pain scale, you should drink one or two cups of Delta-8 THC coffee or D8 cold brew.

Delta 8 is a cannabinoid, too. However, consumers experience euphoria and a “high” that’s similar to Delta 9, except the buzz is less intense and has less uncomfortable side effects, such as anxiety and paranoia.

Delta-8 coffee is loved by many people who drink a cup or two to ease pain and discomfort. The onset is pretty quick: you’ll feel the effects within 45 minutes. So opting for D8 coffee as opposed to traditional coffee will subside your post-exercise soreness so you don’t miss your next yoga sesh.

Delta 8 activates the receptors in the endocannabinoid system (ECS) which is an invisible web of receptors in our brain and body. The ECS is like a bridge that unites your body and mind together.

CBD and D8 promote homeostasis, which is the perfect balance in how we regulate pain, memory, stress, mood, and immunity. ECS deficiencies can cause migraines, fibromyalgia, and irritable bowel syndrome, in addition to inflammatory and

CBD helps balance and promote a healthy endocannabinoid system. This can help keep your stress levels down and keep your mood in check. It can also help reduce painful inflammation symptoms.

Every time you learn something new — even the definition of a word or a guitar chord — a neural pathway forms in the brain. The normal results? People have experienced memory and concentration improvement, minimal impulsivity, and much less stress.

The science behind this scientifically proven fact is simple: Cortisol coined the “stress hormone,” plays an integral role in how the brain reacts to motivation and fear.

When you practice yoga three to five times per week, your cortisol levels balance out, and when you add CBD to the mix it can help even more so. This relieves unwanted stress and anxiety.

CBD coffee not only helps reduce current anxiety but also changes the initial brain reaction to stress. Brain scans actually show changes in our blood flow patterns in regions of the brain associated with stress and anxiety